'Demon Orchid' Has a 'Devil Head' and Claw-Like Petals 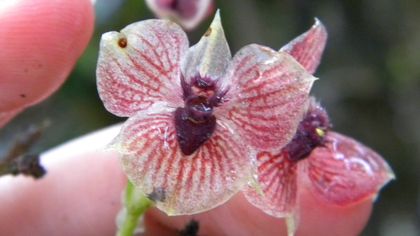 Telipogon diabolicus was named for its flowers' heart-shaped gynostemium, which look like a devil's head.

A new species of orchid is in a league of its own - not just because it's relatively rare, but also because scientists say it looks like the devil.

The new species, Telipogon diabolicus, was named for its gynostemium, the orchid's reproductive structure, which looks like a devil's head. The orchid is also described as having "distinctly clawed petals," adding to its demonic appearance, according to the researchers who discovered it.

About 30 of the reddish to dark-violet-maroon orchids - of which only several were flowering adults - were found growing in a small forest at the border between Putumayo and NariÃ±o (regional jurisdictions called "departments") in southern Colombia. [See Photos of Stunning Orchids]

In their report on the species' discovery, the researchers noted that the flower has already been listed as critically endangered on the IUCN Red List, which lists animals and plants threatened with extinction.

"This species is only known from the type specimens, which represent one location in [a] highly vulnerable habitat near the main road Pasto-Mocoa," the researchers wrote in a study published online July 8 in the journal PhytoKeys. "It is expected that the current reconstruction of this road will have [a] negative impact on the habitat of T. diabolicus."

"However, there is no doubt that hundreds of species occurring in this country remain undiscovered," the researchers wrote in the study.