Deer with 'Vampire Fangs' Spotted for 1st Time in Decades 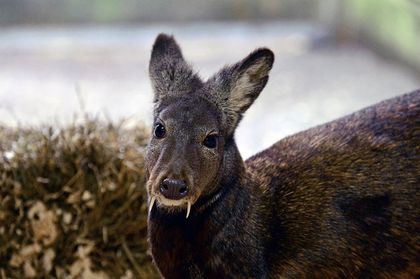 An endangered deer with vampirelike fangs was spotted for the first time in nearly 60 years, in a remote forest in northeastern Afghanistan.

The fanged creature is known as the Kashmir musk deer, and it's native to the Himalayas of northern India, Pakistan's Kashmir region and northern Afghanistan. Only the male deer have fangs, and they use them during mating season to compete for females. A team of researchers scoured Afghanistan's Nuristan province during 2008 and 2009, and recorded five sightings of the animal. This was the first time the species had been spotted since 1948. The sightings were described in this month's edition of the journal Oryx.

These musk deer are classified as an endangered species on the International Union for Conservation of Nature's Red List. Musk-deer meat is a local delicacy, but the species is mostly hunted for its scent glands that are more valuable by weight than gold — some believe the glands have pharmaceutical properties, and they sell for nearly $20,455 per pound ($45,000 per kilogram) on the black market, according to the International Union for Conservation of Nature.

Three decades of war have ravaged Nuristan province, and the continued violence and political instability make the black-market trade of scent glands uncontrollable. Furthermore, the species is quickly losing suitable habitat. Recent geological surveys of the area show that it has lost about 50 percent of its mountainous forests since the 1970s, according to the study.

"This rare species, along with better-known wildlife, such as snow leopards, are the natural heritage of this struggling nation," Peter Zahler, deputy director of the Wildlife Conservation Society's Asia Programs, said in a statement. "We hope that conditions will stabilize soon, to allow WCS and local partners to better evaluate conservation needs of this species."

All of the musk deer were spotted on sheltered rocky outcrops around 9,843 feet (3,000 meters) high. In the summer, they regularly trek along steep slopes that make them almost impossible to approach and keep them relatively safe from hunters. However, heavy snowfall in the winter drives the species farther down, to more human-accessible slopes, and hunters come from all over the country to stalk the deer for their valuable scent glands.

But poaching isn't the only threat this rare Afghan species faces; human development has fragmented the musk deer's habitat. They rely on mountainous, coniferous forests, but deforestation and human settlements are encroaching upon the species' vanishing home.

Due to violence and unrest, nongovernmental organizations like the Wildlife Conservation Society have not been able to operate in the Nuristan province since 2010. The WCS maintains contact with locals they have trained to survey and search for the musk deer. Once the situation in Nuristan improves, the WCS intends to return to the area to continue research and to formulate a conservation plan.