China seizes 620 turtles and tortoises, most endangered, in shipment from Vietnam 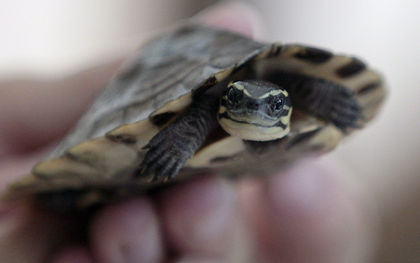 An endangered box turtle is shown by an employee of the Protected Areas and Wildlife Bureau in suburban Quezon City, north of Manila, Philippines on Thursday Aug. 2, 2012. AP Photo/Aaron Favila

BEIJING – Chinese border patrol officials seized 620 wild turtles and tortoises – 510 of them considered endangered – that were found alive in a shipment of frozen seafood from Vietnam, state media said Sunday.

The official Xinhua News Agency said border police detected crawling sounds when they were inspecting the shipment at a border city in the southwestern region of Guangxi on Aug. 24.

Police discovered the endangered species, including Indochinese box turtles and elongated tortoises, in the shipment heading for the neighbouring province of Guangdong, where the animals are considered delicacies, Xinhua said.

The local state-run Nanning Evening News said border officials grew suspicious when the cargo was clearly more than what had been declared and that the driver was nervous when interrogated. They found 15 foam boxes and, upon discovering the live animals, questioned the driver, who was unable to provide any documents proving their legitimacy, the local media said.

The turtles and tortoises were confiscated and handed over to China’s forestry authorities, the media said.