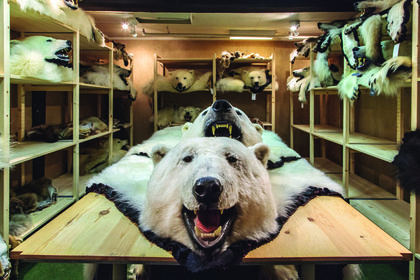 Polar bear skins in storage waiting to be auctioned.

Zak Smith is an attorney for the Marine Mammal Protection Project at NRDC. This Op-Ed is adapted from one that first appeared on the NRDC blog Switchboard. Smith contributed this article to Live Science's Expert Voices: Op-Ed &amp; Insights.

Most people don't know that Canada is the only country where polar bears are still hunted and killed to supply the world trade in polar bear skins and other parts (teeth, claws, skulls, etc.). But Canada's practice of allowing polar bears to be killed for profit when their very existence is threatened by climate change is now going to be scrutinized by the international community, which is expressing concern that such trade is not sustainable.

This critical issue came into focus at a meeting I recently attended in Veracruz, Mexico, of the Convention on International Trade in Endangered Species (CITES) — the international organization tasked with managing trade in endangered species.

The proposal to review Canada's trade in polar bear parts came at the urging of the United Kingdom and Norway, both of which raised questions as to whether the killing of polar bears from vulnerable populations may be detrimental to the species. Their concerns are well founded. The European Union already bans imports from two Canadian polar bear populations (Kane Basin and Baffin Bay) — believing that Canada's management of these populations is unsustainable — and the United States' listing of polar bears under the Endangered Species Act in 2008 bans all commercial and trophy imports from Canada into the United States.

In the review, Canada will have to show two things. First, how the killing of polar bears for profit is not harming threatened polar bear populations. And second, that the nation controls exports in a way that maintains polar bears throughout their range at levels consistent with their role in the ecosystem. But, with climate change impacts bearing down on vulnerable populations, paired with rising demand and prices, it will be difficult for Canada to justify trading polar bear parts. Canada's own experts have questioned whether Canada's management can withstand scrutiny. Andrew Derocher of the University of Alberta, a leading polar bear scientist, stated in February of this year that Canada's management is out of step with the rest of the world as hunter groups seek to increase harvest. He said, "There's very strong pressure across the Canadian populations to increase harvest levels," noting that, "[I]t is going to be a challenge to convince the international community that our science is strong enough to support these increases." [Is a Rhino Hunt Really Conservation? (Op-Ed )]

The international community's review procedure is designed to identify species that may be subject to unsustainable levels of international trade — as was done here in the case of polar bears — and to identify problems and solutions concerning effective management of trade. Recommendations can range from requiring the gathering of additional data (for example, many polar bear populations are "data deficient") to identifying specific export quotas to limit trade. Sometimes the process works and sometimes it doesn't. It can be unwieldy and disappointing. A lot depends on how aggressively the Animals Committee — the CITES committee that conducts the review — pushes back on self-serving submissions from states seeking to defend their management practices. Here for example, Canada's submission may be wanting. Canada's record on climate change has been rightfully criticized and reports continue to surface of territorial wildlife managers rejecting evidence that climate change is harming polar bears as they set quotas for how many polar bears can be killed.

It will be important for other polar bear states — like Norway, Russia and the United States —to push back on these kinds of unsubstantiated assertions and management decisions that veer from accepted conservation standards. Canada has a lot to answer for and the United States and Russia — strong advocates for polar bears at CITES — must continue pushing for greater polar bear protections through the review process, demanding that any trade is not detrimental to the survival of polar bear populations threatened with extinction from climate change.

Smith's most recent Op-Ed was "A Side of Dolphin with Your Shrimp Cocktail." This Op-Ed was adapted from the post "Serious Questions about Canada's Trade in Polar Bear Skins Trigger Review by International Body" on the NRDC blog Switchboard. Follow all of the Expert Voices issues and debates — and become part of the discussion — on Facebook, Twitter and Google +. The views expressed are those of the author and do not necessarily reflect the views of the publisher. This version of the article was originally published on Live Science.