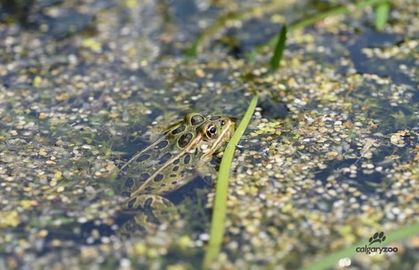 The Calgary Zoo announced Tuesday it would be launching a new breeding program to help the endangered northern leopard frog.

The re-introduction breeding program is only the second of its kind in Canada, according to the zoo.

Population ecologist Lea Randall says the northern leopard frog is considered to be the most endangered frog in British Columbia and is genetically distinct from others found in Canada.

“One-third of the world’s amphibian species are at risk of extinction,” she said. “We know that frogs play vital roles in our ecosystems and by having an on-site re-introduction conservation program it will help to ensure their survival into the future, and ultimately help global amphibian conservation efforts.”

Speaking on News Talk 770 on Tuesday, Randall said past efforts to breed the frog haven’t been terribly successful.

“We’ve really got some animal husbandry experts and we’re trying to replicate the natural environmental conditions, which we think will probably set us up for success,” she said. “We have a place … where we’ve got 900-metre ponds that are embedded in the ground, surrounded by some good upland grassy habitat for the frogs.”

WATCH: A conservation biologist with the Calgary Zoo has details on the breeding program for the northern leopard frog

The zoo has been conducting research on the population dynamics of leopard frogs since 2003 in an effort to help populations in Western Canada recover and is also a member of the B.C. Northern Leopard Frog Recovery Team.

“A single remaining native population in B.C. exists within the Creston Valley, but this population is vulnerable to habitat loss, road mortality and disease,” a news release explained.

“Anyone that has seen this species of frog – which used to be quite plentiful here on the Prairies – sometimes they’ll find them many kilometres from a water source, so they tend to be a really active frog, very terrestrial,” Randall added.

“We’re trying to provide them with that kind of a better habitat and our plan is if we can have happy and healthy frogs then maybe they’ll want to produce more tadpoles for re-introduction efforts.”

Initial founder frogs have been transported to Calgary from the Vancouver Aquarium for the breeding program. As the program grows, additional eggs or tadpoles will be brought in from the wild to help maintain the genetic diversity of the re-introduced populations.