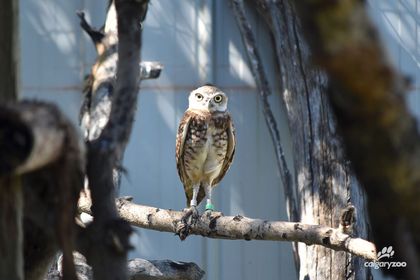 The Calgary Zoo has launched a project to improve the survival rate of burrowing owls. Calgary Zoo

A “first of its kind” project to try to increase the survival rates of the endangered burrowing owl in Canada has been launched in Calgary, the Calgary Zoo said Tuesday. Officials said wild populations of the species continue to decline after a 90 per cent drop in the 1990s.

“Our team worked side-by-side with federal and provincial field staff to gather 15 of the youngest owlets that may not otherwise survive,” said Dr. Axel Moehrenschlager, Calgary Zoo director of conservation and science in a statement. “Following an extremely successful first field season, we are very pleased with our progress to date and will continue to prepare for the next phase of the project.”

The zoo worked with Environment and Climate Change Canada (ECCC)’s Canadian Wildlife Service (CWS) and Alberta Environment and Parks to take the young burrowing owls from the wild and raise them in captivity for nine months.

The unique pigeon-sized owls will be released back into the wild to breed in spring 2017 and will be tracked with satellite transmitters.

“Their main challenge appears to be when they migrate south of our border each year. We believe this innovative idea is the best current option for protecting the owl,” he said in a statement.

Zoo officials said survival rates are especially low when there’s been bad weather. Few surviving owls return to Canada after migrating to and from Mexico (the owls’ winter home) through the United States. Staff said it’s unclear whether the owls die or just decide not to return to north of the border.

“The Alberta government is very excited to be a part of this unique conservation project to potentially save such a vital species in our province,” Alberta Environment and Parks senior Species At Risk biologist Brandy Downey said in a statement.