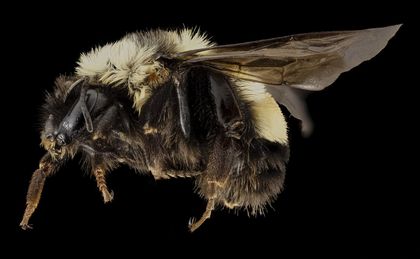 Here, a rusty patched bumblebee (Bombus affinis) from Sky Meadows State Park at the edge of the Blue Ridge in northern Virginia.

The U.S. Fish and Wildlife Service (USFWS) has proposed listing a species of bumblebee as an endangered species, the first bee species to be granted such federal protection in the continental United States.

The rusty patched bumblebee - the workers of which can be identified by a small rust-colored mark on the middle of their second abdominal segment - was historically widespread along the east coast of North America, from Quebec down to Georgia, and across much of the midwest as far west as the Dakotas. However, says USFWS, since the late 1990s, the species' numbers have decreased precipitously, and its range is now a mere 8 percent of its historical extent.

According to the Xerces Society for Invertebrate Conservation, the bee faces numerous threats from disease, pesticides, habitat loss, and climate change. The society says that the species' recent decline -- and that of other, closely related, bumblebees -- was likely initiated by the spread of pathogens from commercial bees (which are raised and sold to pollinate greenhouse tomatoes and other crops) into the wild population.

Additionally, there's concern over the widespread use of neonicotinoid insecticides within the species' range. These insecticides have been implicated in declines of other bee species and were introduced around the time that the rusty patched bumblebee entered its downward spiral. TheUSFWS finding also concluded that problems such as habitat loss and fragmentation and climate change may also be contributory factors.

The Xerces Society notes that the species is an important pollinator, not only of prairie wildflowers but also of cranberries, blueberries, apples, alfalfa and other crops. "Native pollinators in the U.S. provide essential pollination services to agriculture which are valued at more than $9 billion annually," said Eric Lee-MÃ¤der, co-director of the organization's pollinator program.

The rusty patched bumblebee is already listed as critically endangered on the IUCN Red List of Endangered Species, and the USFWS action comes in response to a 2013 petition from the Xerces Society and a lawsuit the following year filed by the society and the Natural Resources Defense Council (NRDC).

RELATED: Bumble Bees Born with Ability to Buzz for Pollen

"This decision comes not a moment too soon," said Rebecca Riley, senior attorney with NRDC. "Bee populations - including thousands of species of wild bees -- are in crisis across the country, and the rusty patched bumblebee is one of the most troubling examples. (This) decision is a critical step forward. If finalized, the endangered species protections will improve the health of our ecosystem as well as the security of our national food supply."