Arizona's Only Jaguar Prowls a Difficult, But Hopeful, Path 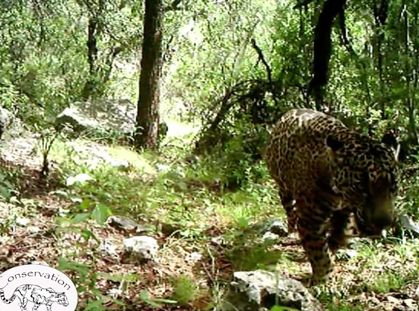 El Jefe, the only known jaguar in the United States, has been in southern Arizona for at least three years.

On video, the United States' only jaguar is a graceful presence. He pads through the forest of Arizona's Santa Rita Mountains, sunlight dappling his spotted coat. The phrase "charismatic megafauna" never seemed so apt.

After the release of this jaguar video by two conservation organizations in early February, El Jefe the jaguar became a national name (he's been well-known around Tucson for more than three years). But this glimpse of the great cat is only the tip of an enormous iceberg of history for jaguars in the United States. Once driven out of the United States by hunting and ranching, jaguars are now in the eye of a more sympathetic public. But there is debate over the protections they need from threats like copper mines and border walls, and bad blood between the groups responsible for conserving these cats.

"If the U.S., with all our resources and expertise, can't protect a single known jaguar, then what hope do we have in all of these developing countries?" said Aletris Neils, the founder of Conservation CATalyst, a conservation organization that jointly released the El Jefe videos with the Center for Biological Diversity. [See Stunning Photos of Jaguars in the Wild]

El Jefe's presence in the Santa Rita mountains near Tucson has been known for years. For a time, scientists with a University of Arizona program were tracking the big cat using camera traps and a scat-sniffing dog. Funding for that project has since dried up, and Conservation CATalyst is the only group keeping an eye on El Jefe at the moment, Neils told Live Science.

Jaguars once ranged across the American Southwest, as far west as California and as far east as Texas. This U.S. region is at the northern end of their range, which stretches as far south as Argentina.

"Jaguars, different from any large carnivore in the world, are the same species from Arizona to Argentina," said Howard Quigley, jaguar program executive director for Panthera, a global wild cat conservation organization. This means that connectivity between habitats is key to keeping jaguars from going extinct. [Big Cats: Photos Reveal Elusive Jaguars]

But in the early 1900s, there was a concerted effort to remove large predators to make the American West safer for livestock. The federal Bureau of Biological Survey hired trappers to kill jaguars, wolves and other carnivores, and counties across the West offered bounties for hunters who killed these animals. The Bureau of Biological Survey would later become the U.S. Fish and Wildlife Service.

The federal agency did its job well. For decades, the only confirmed jaguars in Arizona were dead jaguars, usually killed by ranchers or hunters who inadvertently stumbled across one of the elusive cats. The last known female jaguar in the United States was shot by a hunter who mistook her for a bobcat in 1963. Jaguars were protected under the Endangered Species act in 1973, but at that time, no one thought the animals lived in the United States.

"Then it became a situation where if you did kill a jaguar, you were no longer going to talk about it," Neils said.

Then, in the late 1990s, a mountain-lion hunter named Jack Childs photographed a treed jaguar. It was the first confirmation of a jaguar in the United States in decades that didn't involve the jaguar's death. The discovery of the cat spurred more protections and more tracking through camera traps. For a time, wildlife experts were watching two male jaguars in Arizona. The cats were dubbed Macho A and Macho B. [Camera Trapped: Elusive Wildlife Caught in Photos]

The tragedy of Macho B

Macho A eventually fell off the radar - wildlife experts aren't sure if he died or traveled back south to Mexico - but Macho B's story would ultimately change the way jaguars are seen in southern Arizona. In 2009, the jaguar was snared in a foot trap in the Atascosa Mountains near the Mexican border. He was then tranquilized and fitted with a radio collar by biologists working for Arizona's Game and Fish Department.

Originally, Game and Fish officials claimed that the trapping had been a fortuitous accident. But 12 days later, Macho B stopped moving. The 16-year-old cat had been unable to withstand its injuries from capture and the side effects of the tranquilizer used to put him under. He was flown to the Phoenix Zoo and euthanized. Soon, one of the biologists admitted publically that Macho B had been intentionally lured to the foot trap with female jaguar scat.

A criminal probe ended with the conviction of one of the biologists who set the trap, and a dismissal of charges for the second whistle-blower. State wildlife officials portrayed the two biologists as rogue elements, acting without permission. But a two-year investigation by the Arizona Republic, published in 2012, suggested that higher-ups in the game and fish department knew about and condoned the capture.

Jaguars on the edge

The result of the Macho B saga has been a web of distrust surrounding jaguars in Arizona, according to experts contacted by Live Science. Many people involved still work on jaguar-related projects in the area. The flubbed capture makes it very unlikely that anyone will ever get radio-collar data on an Arizona jaguar, Neils said.

"El Jefe, he would be a prime candidate" for collaring, she said, as he's young and hearty. But because of the fallout from Macho B's death, "it'll just never happen."

Noninvasive research, including video-camera traps, has revealed much about El Jefe's movements. But little of the landscape in Arizona's potential jaguar range is monitored, said Randy Serraglio, a conservation advocate at the Center for Biological Diversity.

Jaguars "have excellent camouflage and are extremely stealthy, and they will almost always detect a human before a human is aware of the jaguar," Serraglio told Live Science. "They really prefer to avoid human contact if at all possible, unlike mountain lions that will sometimes adapt to suburban fringe and even prey upon people's pets." [Images: The Oldest Big Cat Fossils]

In part as a result of the lack of study, no one truly knows how important Arizona is to the survival of jaguars. Every portion of a species' range is important, said Howard Quigley of Panthera, but in a head-to-head comparison, he would rank places like western Honduras and eastern Guatemala as more crucial to jaguars than Arizona. Neils argues that the key parts of the jaguar range might shift with climate change. Many neotropical species like javelinas and peccaries are moving northward with warming temperatures, she said, and those animals are prime prey for jaguars.

"Individuals on the periphery of their ranges often have incredibly diverse genetic compositions and adaptive traits," she said. "These may or may not be some of the individuals that for long-term survival [of the species] could be very crucial."

Throughout their range, the biggest threats to jaguars are retaliatory killings after the loss of livestock, and loss of habitat, Quigley said. The science predicting what will happen to Arizona as the globe warms isn't clear, but habitat loss is something Arizona conservationists are fighting. The release of the El Jefe video was prompted, in part, by the proposed Rosemont copper mine in the Santa Rita Mountains near Tucson. That mine would degrade the habitat of El Jefe and other jaguars like him, conservationists argue. The mine proposal has also garnered opposition from local residents and ranchers concerned about water usage and contamination. The area is habitat not only for jaguars, said Gayle Hartmann, president of the advocacy group Save the Scenic Santa Ritas, but for endangered ocelots.

The U.S. Fish and Wildlife Service is expected to issue a biological opinion in March on whether the mine can move forward, Hartmann said. The agency will either forbid further development or require environmental mitigation. The Forest Service will then issue a record of decision on whether the mine can go ahead from their point of view, while the Army Corps of Engineers must decide on whether they'll issue a permit for the mine under the Clean Water Act. Hartmann doesn't expect all of these permits to move forward; if they did, the group plans to appeal the initial Forest Service Environmental Impact Statement about the mine to federal court.

Meanwhile, conservationists are battling with the Canadian mining company HudBay over whether they should have received a state air quality permit. That case is hung up in the Arizona state appeals court. Copper prices have fallen dramatically over the past five years, but HudBay remains committed to the project, according to the company's investor documents. In an investor call on Thursday (Feb. 25), company executives described Rosemont as a "shovel-ready project that's just sitting there waiting for the market conditions to improve."

Studies are underway in Central America to understand how mines affect jaguars, Quigley said. Development might be possible with the right mitigation, he said, but the mine's footprint represents an unavoidable loss of habitat.

"For now, I think the jury is out and any place where we can save habitat is good for jaguars," he said.

A final hurdle for jaguar survival might just be Donald Trump - or at least, the impermeable border wall the Republican primary candidate has proposed. Walls form a barrier to jaguars, but also to their prey animals, Neils said. Federal agencies are required to pay for environmental mitigation to make up for damage from border patrol activities and barriers, but that money can be a perverse incentive. The Arizona Republic's investigation of the death of Macho B found evidence that the competition for federal mitigation funds helped drive state wildlife officials to take undue risks in capturing the geriatric jaguar.

In the far northern reaches of jaguar range, the challenge is simply to maintain the status quo.

"We don't have to invest a single dime," Neils said. "We just have to not mess things up and we will continue to have jaguars."