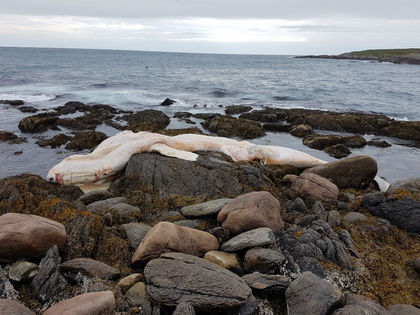 Canada’s Department of Fisheries and Oceans (DFO) has launched a new campaign looking for the public’s opinion on what can be done to save endangered whales in Canadian waters — even as reports detail the government’s options.

“Some of the whales in Canada are in trouble,” reads the Let’s Talk Whales campaign website. “We want to hear from YOU on how we can work together for healthier oceans.”

It asks the public to submit ideas in order to address some of the key threats whales face including food availability, underwater noise, entanglements, contaminants and vessels.

This consultation plan has been in the works for a while as part of the government’s Ocean Protection Plan, but the decision to consult the general public now comes at an awkward time for the fisheries department.

An image from the website promoting the Let’s Talk Whales campaign.

At least 12 North Atlantic Right Whales have died in the Gulf of St. Lawrence.

That’s more than two per cent of the estimated 525 whales left in the world.

It’s a number that the DFO has called “unprecedented” and has brought concern to the ocean science community.

Tonya Wimmer, the director of the animal advocacy and conservation group Marine Animal Response Society (MARS), said that it’s good the public will be able to voice their opinion and provide feedback to the government.

READ MORE: Endangered whales are dying in Canadian waters. Here’s what you should know

“I think it’s very good if the government takes into consideration what people think,” she said.

“As long as it leads to actual action that helps lead to the protection of these animals.”

The DFO did not answer questions on the purpose of the program and when it was developed.

They did send a written statement that said  “governments, industry, academia, conservation groups, Indigenous groups and the public must all work together to help save these iconic whales in Canada.”

But many of the questions the DFO are asking the public to give their opinions on already have answers.  A 2016 report, available on the DFO website, reviews what the department had done from 2009 to 2014 to preserve the Right Whale population. The report also offered recommendations on what the government could do to improve its efforts.

All five topics that the government is soliciting feedback on — food availability, underwater noise, entanglements, contaminants and vessels — are discussed in the report.

In the recommendations for entanglements, for instance, the report details that tests have already been conducted on multiple types of fishing gear and ropes in order to find what posed the greatest threat to whales.

Researchers found that the use of stronger rope by the fishing industry in previous years has increased the likelihood of entanglements.

“They recommended that ropes of reduced breaking strength be developed and tested in fixed gear fisheries, as they could contribute significantly to reducing entanglement risk while supporting viable fisheries,” reads the report.

WATCH: What is the federal government doing to protect right whales?

The report also details that between 2009 and 2014, the government did not conduct any analysis of Right Whale biopsy samples despite having many in their possession.

While it wasn’t deemed a high priority, earlier work demonstrated “the presence of brominated flame retardants and organochlorine contaminants in Right Whale.”

The report didn’t conclude what effect that would have on the species but did say it was a low priority for researchers.

The report concludes by saying that the “recovery of the North Atlantic Right Whale population is feasible and the objectives continue to reflect the necessary directions for research and recovery.”

Sean Brillant, the marine programs manager for the Canadian Wildlife Federation says the new campaign is a step in the right direction. He says that the last decade has seen very little done on the protection of whale species.

“Now they’re sort of looking for options of what to do and it’s an encouraging thing,” he said.

While this likely won’t provide an immediate response to the current crisis on the North Atlantic Right Whales, Brillant says this will look at the long-term future of Canada’s marine mammals.

— With files from Alexa MacLean